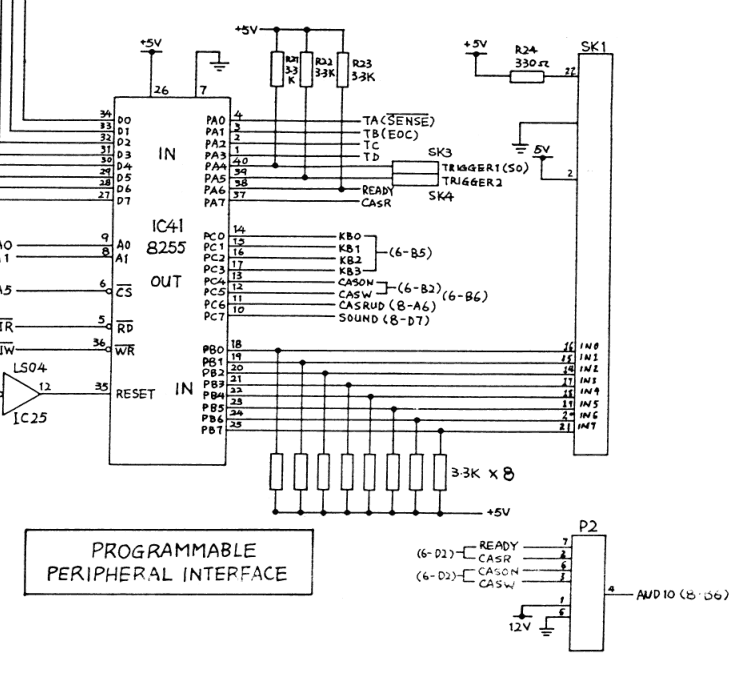 Time between falling edges is constant because it takes one half of both short pulse and long pulse.

Spectravideo ROM code checks the polarity of cassette signal with a routine at 0x2117. It does that by measuring 100 pulse pairs and checking whether their lengths are all far enough from each other to be normal signal or close enough to be inverted signal. If cassette signal is inverted, code sets flag at 0xFD4C to non-zero value. Read_pulse routine at 0x2164 uses this flag to use either falling or rising edge to measure pulse length.

Once the polarity has been detected, ROM code at 0x2149 waits until it finds bit pattern 01111111. Only then it returns and the actual header starts.

Whenever the tape is stopped, one extra zero byte (with start bit) is written, followed by a short pause before the tape player motor is actually stopped.

Everything except the lead-in and sync mark is stored with nine pulses - each data byte has a start bit prepended to it. That is done to give some extra time for inter-byte processing and to ensure that Spectravideo can accurately measure length of the first data bit. Start bit is always a long pulse (0) but that isn't checked in the loader code.

The first pulse is the start bit, next eight are bits "00110001" stored the most significant bit first.

Cassette is stopped after writing the header. This routine at 0x206C adds one more zero byte which isn't technically part of the header.

Spectravideo uses the following standard file types, but nothing stops users from using their own, either by calling ROM functions or rolling their own ones. Note that the zero byte written by _CTWOFF routine called at STOP is not explicitly shown below.

BYTE
STARTBIT : - this is not verified to be zero when reading
DATA : MSB first